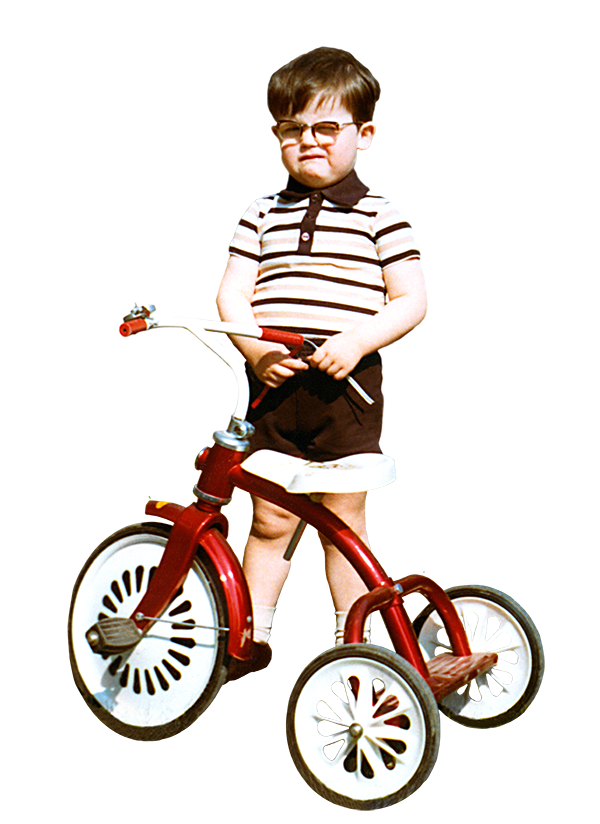 A creative problem solver with a passion for crafting well designed, testable and efficient code.

Programming from an early age, both in personal and professional capacities, my curiosity and aptitude for software development drives me towards a challenging and collaborative technical career. I have an acute attention to detail and its place in wider systems, coupled with an appreciation for the bigger picture. I am highly motivated and thrive on continued fast-paced learning.

Since losing the hair, glasses and, sadly, the red tricycle, I've done a few things. I did a degree in Geography at the University of Glasgow then went on to be a Geography teacher, IT trainer, and self-employed Educational ICT Consultant.

I've been programming in some capacity from the age of twelve. HTML based educational materials, web sites, Microsoft Office AddIns and scripts, microcontroller code, multimedia and many, many creative coding projects.

I completed a PostGraduate Diploma in Multimedia and Web Development (with Distinction no less!) at the University of the West of Scotland in 2012. The end of this coincided with demand for me to develop and delivery CPD training courses for Computing Science teachers to ready them for the changes being made to the National, Higher and Advanced Higher SQA courses.

Under the name Yuleblinker I developed and delivered courses for Computing Science teachers on HTML, CSS, Javascript, PHP, MySQL and Python.

At the same time I started to develop and deliver courses for Design and Technology teachers on behalf of 3DMadeEasy. The courses were mainly on Autodesk products being used in schools - Inventor, AutoCAD, 3DS Max and Revit Architecture. More recently I also started to do courses around the topic of 3D printing. 3D modelling and, in particular, the creation and use of 3D on the web in AR and VR have driven a number of coding projects.

Recently I decided it was time to follow my enduring passion for all things related to coding and software development and pursue a career as a software engineer. In early November 2018 I will be graduating from the 16 week intensive Professional Software Development course run by CodeClan

Below you'll find links to a number of the coding and web-development projects I've created.

Below are a few examples of web sites and apps that I've created. Some static, some using CMS and SQL databases. Those toward the top represent my more recent projects. Some others are a bit dated but represent my broad interests in a wide range of technologies. A couple use Flash and one even uses Silverlight (I was forced to!)

Click on the image or text links to open a new browser window displaying the site. Click on the GitHub links to view the code for selected projects.

I've always like coding visual things. I used to do quite a lot of Flash animations. Recently I've been using Processing (a Java-based coding app) and p5js (a javascript version of processing). I particularly like 3D visual things and have been playing around with WebGL.

Below are a few recent 'sketches'. The YoutTube videos are renderings of Processing sketches. The others can be clicked on to see the live javascript animations in your browser.

The code for each project can be viewed using the GitHub link.

A lot of my hobbies and pastimes seems to include techy stuff too. 3D modelling, 3D printing and messing about with microcontrollers to name a few.

Below are a few YouTube videos I've made related to these things.